Guy was born in South Africa in 1967. After matriculating in 1984 and completing his two-year National Service he started work in the wildlife industry. Guy first qualified as a Professional Hunter in 1989. In 1992, Guy moved with his wife to Zambia where he guided trips on the Zambezi river and conducted hunting safaris .

In 1996, Guy began hunting in Tanzania and has guided there ever since. He has extensive knowledge and experience in a wide variety of hunting areas in Tanzania. He is a committed hunter and goes to great lengths to ensure a good trophy. He is also a keen fisherman and enthusiastic wing shooter. In recent years Guy has realized a life long dream of flying and now holds a commercial pilot license. 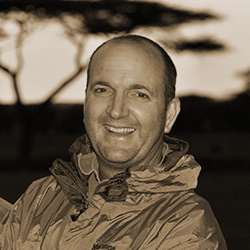 I look forward to seeing you in the New Year